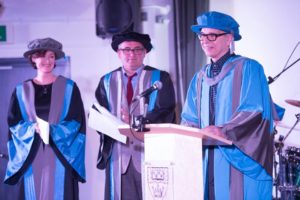 We’ve been very busy recently…
Lots of planning has been taking place and there are lots of exciting things in the pipeline (watch this space), but we’ve now finally found time to upload footage of the wonderful moment when Tony was awarded an Honorary Doctorate by Kingston University. The award was conferred upon him for recognition of outstanding and world-leading contribution to studio production.

For those of us lucky enough to be there, it was a truly memorable evening. As part of the ceremony, Visconti Studio was also declared officially open for business. Speeches were made by our partners, The British Library and The Science Museum, about the forthcoming large-scale research project “The Heritage and Future of Analogue Recording and Production”. The project aims to document and preserve the legacy of the analogue era.

The Visconti Studio team also got up and said a few words, as well as one of our students from the pilot project, Sacha Denton, who had the audience in stitches with her heartfelt and very funny speech. Further to the ceremony, Mary Epworth and her band performed a short set which went down storm. A great night!!!