It was great to welcome composer Greg Harradine to Visconti Studio recently. Greg is a composer and musician with a passion for working creatively with others. His work focuses mainly on theatre productions and vocalists, but also with dance companies, choirs, festivals, community groups, film-makers and instrumental ensembles. Greg composes in a variety of styles, from folk to orchestral to electronic, writing both instrumental music and songs, including lyrics. He has won several awards for previous compositions, including the Cameron Mackintosh Resident Composer Award in 2014 and was a finalist in the Royal Shakespeare Company’s Songwriting Competition in 2015. For a full biog, plus to hear samples of his work and all the latest news, check out Greg’s website here.

The work, titled The Story of Henry Wicker (and of what he unearthed on Epsom Common one summer’s day in 1618 or thereabouts) is a new suite for cello and piano in six movements, and was commissioned for the forthcoming Epsom and Ewell Arts Festival MGSO4. In an novel approach inspired by the chemistry of Epsom Salts, Greg’s work converts the atomic numbers of magnesium, sulphur and oxygen (Mg, S and O) into musical notes. The piece pays homage to Epsom and retells, through music, the story of the medicinal salt’s discovery in 1618. 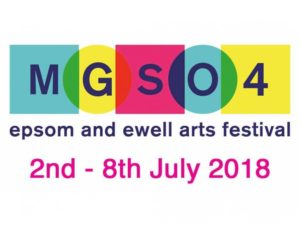 In Greg’s own words “The exciting new MGSO4 Festival in Epsom has commissioned me to write a new work on the theme of ‘Discovery’. The new piece will last around 30 minutes and be performed as part of the Festival this summer on Saturday 7th July in Epsom. I am delighted that the wonderful Midori Jaeger will be the cellist, whilst I will do my best to hit the piano keys at the right time and in the right order. I would love it if you could make it along to the world premiere in Epsom on 7th July.” 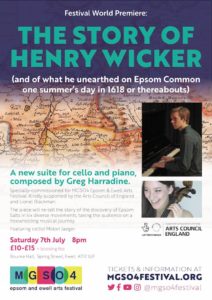 Check out the short teaser below, filmed as Greg recorded at Visconti Studio.