We’ve just completed a short project with our friends at Audient who brought a range of their products to Visconti Studio for an audio shoot out. The Audient console mic preamp has been found in products for over 20 years now – the same console mic pre is used in all of their current products. Helping us with the recordings was talented indie-folk artist, Zach Johnson. The recordings were engineered by our very own Rob Plummer.

The recording:
The following mics were used to capture the sample recordings:

Each were chosen for a specific reason. The SM57 was chosen because most people have experienced using them and it is often a first microphone, so having that as a reference was important to us. The AKG 414 was chosen because it is a commonly used microphone to record both a vocal and guitar source, and finally the MKH40 was chosen for its very flat frequency response, in theory allowing the character of the Audient mic pre to be heard without extra colouration. 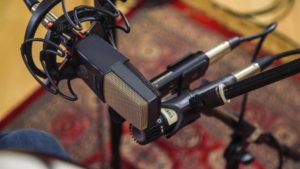 For both guitar and vocals, the mics were placed as close together as possible, lining up the diaphragms as best as possible to ensure the same distance between the source and mic. The mics for guitar were aimed between 12-14th Fret, about 8 inches from the guitar. For vocals, our performer Zach was about 6 inches away from the mics with a pop shield in between to reduce plosives.

Conscious efforts were made to try to keep the positioning consistent throughout, however due to the nature of the guitar being handheld and Zach not being physically fixed a certain distance from the microphone, there may be some small deviation in positioning.

When recording we started with the ASP8024 Heritage Edition in the Visconti Studio control room, which was converted using the studio’s Apogee Symphony I/O MkII which has a very flat response (which you would hopefully expect from a £4000 box). so shouldn’t affect the character of the ASP8024-HE preamps. 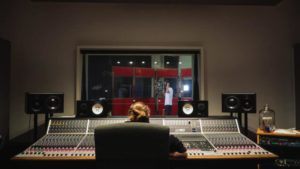 For the other products we recorded with a laptop running logic in the live room, working our way up from the smallest interface iD4, up to the 8 channel preamps which were connected to iD44 via ADAT to bring the signal into Logic. We recorded 24bit/96kHz across the entire set of recordings. 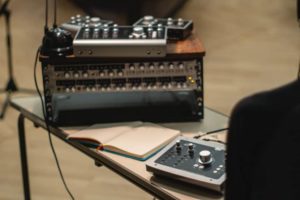 Where possible, we recorded the mics simultaneously, however with products such as iD4 we had to do individual takes for the different mics as there is only one mic pre on the unit. For each mic, we set the gain so that the peak signal level came in at roughly -10dB on the meters (a level we recommend to our product owners to optimise the converter performance).

Each clip was edited down to size in Logic Pro X, with a short fade in and out during the silence on either side of the recording. A few of the clips were comped together from a few different takes, however used the same product and microphone. This only happened in 2 or 3 samples. 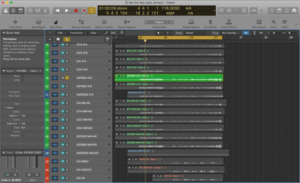 Once edited, the clips were normalised and bounced individually from Logic (still at 96kHz and 24 bit). No other processing of any kind has been applied to these clips (any reverb you hear is the wonderful Visconti Studio natural room ambience). 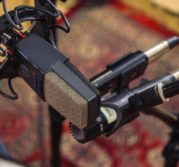 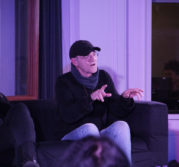 Photos from ‘An Evening With Tony Visconti & Woody Woodmansey’