A driven talent, Tom has released a string of well-received EPs and a full-length album since 2014, amassing over 160m streams on Spotify and over 6.4m on Apple Music so far. He undoubtedly radiates positivity. For that, in part, he has his fans to thank – millions of them, all over the world. In Brazil, they sent his song “Little Love” to No.1. In Germany, they chose him to serenade contestants on the TV show The Bachelor. Everywhere he goes, his dedicated fans sell out his headline shows. Tom continues to gain strong support at BBC Radio 2 with 7 consecutive singles playlisted, National TV performances, and a selection of festival appearances including Glastonbury. The concert was recorded live to analogue tape by Kingston University music students.

Tom’s new album, Everything’s Waiting For You is out now!

For further information about Live to Tape events including performing at one, please contact Alex Evans – a.evans@kingston.ac.uk
Share this... 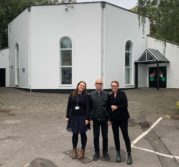